Giovanni Frangi was born in 1959 in Milan, where he lives and works. After a series of collective exhibitions, in 1983 he had his first solo exhibition at La Bussola Gallery in Turin. Soon he began to attract the attention of critics, poets and writers, who wrote essays and poems for his catalogues between 1986 and 1997. The following years, Giuseppe Frangi’s work was exhibited abroad for the first time, with solo and group shows in Bern, Barcelona, New Orleans, Lausanne, Hong Kong and Los Angeles. The artist work explores the power of colour in landscapes influenced by the passing of the seasons and the light. Frangi’s early work was strongly connected to the Northernexpressionist culture, together with the luminism post-­impressionist research. Reality is what really interests the Artist and what he tirelessly wants to investigate. His research goes beyond the false problem of figuration, trusting his own inner vision which allows him to discover a different reality and to represent it without using realism as the main reference. He reaches full mastery of his images once these have been destroyed, crushed and turned into lyrical visions of the everyday life. In May 2015, M77 Gallery in Milan hosted Giovanni Frangi solo show La Legge Delle Giungla (The Law Of The Jungle), the first show after few years of absence of the Artist from his native city.
Download CV 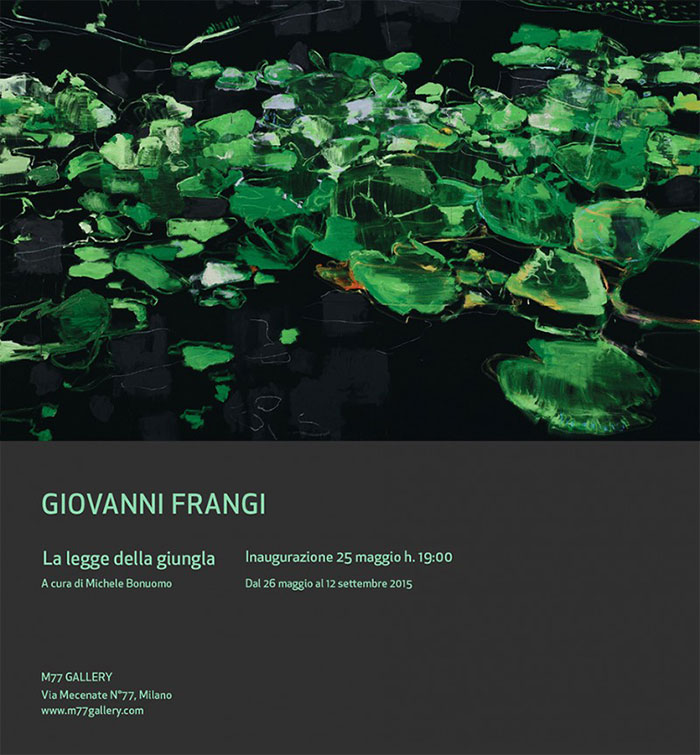 Specially created for the gallery’s evocative spaces, the exhibition La Legge Della Giungla (The Law Of The Jungle) marks the artist’s return to Milan after five years’ absence from his city of origin. At such an important time for the city, at the height of its post-industrial re-invention not just as regards architecture but its entire urban identity, Giovanni Frangi has decided to return here to present a show that is not simply a description of the city, but rather a gift, a new vision, a summary of all the worlds that he has experienced during the course of the “nomadic workshops” that he has developed in recent years.

The exhibition features 24 large-­scale artworks where the Artist creates an arcadian, even primitive atmosphere, dominated by nature and motifs of tropical inspiration. His artworks are screens where a forgotten reality is projected, easily in conflict with our everyday world: they are populated by motifs of tropical inspiration, with branches, leaves, shrubs and lily ponds. La Legge Della Giungla does not just suggest a nostalgic return to a life in harmony with nature, but rather it is intended as an examination of the difficult relations between nature and city, presenting a new vision, and a new interpretation in which there are the seeds of the possibility of surpassing a conflict that has always existed. La Legge Della Giungla is the no-man’s land on which the two factions meet, after the battle: the city is no longer an enemy of nature, but its development, continuation and projection. La Legge Della Giungla is nature that becomes urbanized, populating the virtual spaces that are an essential component of much of today’s contemporary urban life. La Legge Della Giungla is the interaction of different worlds, with different territories overflowing one into another. The reconciliation between these two worlds can only begin from man and his capability of accepting the absence of frontiers, something that is a feature intrinsic in contemporary reality and its technology.