Born in Johannesburg into a working-class Afrikaans family during the height of apartheid, Kendell Geers grew up realizing that his moral, spiritual and cultural education was based on racist lies. He ran away from home at the age of fifteen, and performed an artistic operation on himself by deciding to change his date of birth to May 1968.

Fighting a Crime Against Humanity on the front lines of activism and protest, he fled from the military re- gime which had sentenced him to six years imprisonment, reaching London in 1988 as a political refugee. In 1989 he moved on to New York where he found employ as Richard Prince’s full-time assistant. In 1990, following Nelson Mandela’s release, Geers returned to South Africa to help build the new democracy.

As an artist, curator, musician, designer and writer, Geers works without compromising. In the belief that art is both political and spiritual, his multi-faceted practice cannot be categorized in terms of trends, cli- chés or fashion. The raw energy of a punk attitude blends with the visceral visionary philosophy of poets like Rimbaud, Blake and Burroughs in a mysterious cocktail of unexpected contrasts. 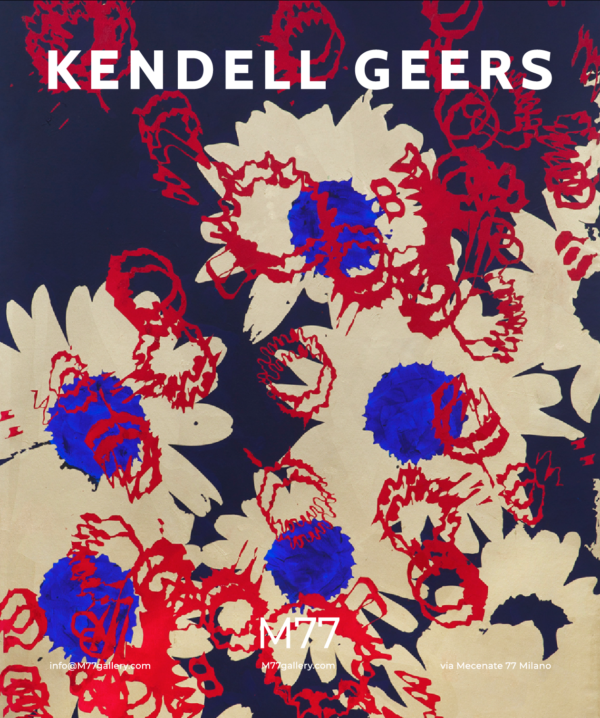 European by descent, African by birth, Kendell Geers defines himself as both animist and mystic, shaman and alchemist, punk and poet. Committed to the fight against apartheid from a very young age, Geers used his experience as a revolutionary to develop a psycho-socio-political approach in which ethics and aesthetics are viewed as two sides of the same coin spinning on the giant table of history. In his hands, the vast narrative of art is brought into question, the languages of power and ideological codes are disrupted, expectations dashed, and systems of belief are transformed into aesthetic canons.

The exhibition’s title OrnAmenTum’EtKriMen is based on the 1908 essay Ornament and Crime by Austrian architect Adolf Loos, pioneer of modern architecture who condemned the decorations on the façades of buildings as a useless, even dangerous excess, steering the course of architecture towards the concept of functionality. For M77, Geers embraces Loos’ cultural heritage by interrogating the languages of Minimalism and the model of gallery white cube, throwing aesthetics against the brick wall of experienced and shards of broken ethics.

Through a selection of historic pieces, his newest production and site-specific installations designed to interact with the gallery’s interiors, the artist creates an itinerary in which the juxtaposition of different materials and the powerful impact created by his use of colour and pattern give rise to a series of cross-references and contrasts intended to threaten the cherished beliefs of the observer, consciously or unconsciously immersed in a setting that is indeed attractive but that is in fact inhospitable and potentially dangerous.

OrnAmenTum’EtKriMen is a call to arms, but instead of bullets, love, like art, is a weapon of transformation because « Art Changes the World – One Perception at a Time ».