M77 presents The visibility of the invisible, an exhibition project dedicated to the artist Alberto Biasi (Padua, 1937), curated by Alberto Salvadori and specially devised for the spaces of this gallery. The exhibition has been open to the public from Monday 17 May to Sunday 19 September 2021, and has been now postponed until Saturday 25 September 2021.

Alberto Biasi is one of the most important personalities of post-war Italian art: Programmed Art pioneer and co-founder of the historic Gruppo N, Biasi has focused his artistic quest on optic-kinetic research extending to the creation of installations, ambient settings, and more recently, sculptures.

With this exhibition, M77 and curator Alberto Salvadori wished to return to the origins of the Padua- born artist’s very long career, highlighting primarily its gestalt and experiential aspects, along with the revolutionary role that he performed to introduce the concept of ambient/artwork into Italy. The four ambient settings and the installation exhibited at M77 are not based just on space and light, but also, and above all, on the people who visit the worlds that the artist has prepared for them: spectators, with their reactions and responses to the artist’s estranging proposals, are the true protagonists of the work.

“I chose The visibility of the invisible as the exhibition’s title”, explains Salvadori, “because what I want to focus on, in Biasi’s work, is the centrality of the spectator’s co-creative participation by means of the phenomenological structuring of the experiences proposed by the artist in an authentically personal itinerary, rather than his exploration of visual perception in its most specific sense, important though this is. When studying Biasi’s early oeuvre, it is impossible to over-estimate the almost Dada approach and the playful pleasure with which his ambient-installations were devised and presented; the same can be said of the influence of Eco’s Opera Aperta (Open Texts), which was truly decisive”.

At the entrance of the M77 building in Via Mecenate, visitors will be welcomed by La mostra del pane (The bread exhibition), a 1961 installation demonstrating clear links to Duchamp, in which the bread rolls made by an imaginary baker, named Giovanni Zorzon, a reference to Giorgione, whose birthplace was not far from Biasi’s, are exhibited.
The ambient settings Proiezione di luce e ombra (Projection of light and shadow, 1961) and Light Prism (1962),without doubt Biasi’s first works of programmed kinetic art, are on the other hand works that share the characteristics of real kineticism, in other words incorporating small electric motors that introduce a programmed movement into the space in which visitors move, and into its lighting.
With the 1974 piece Eco (Echo), the spectator’s active role as a fundamental part of the artistic operation is even more obvious: this is an environment that steals the observer’s image, by generating a mark/shadow of the person interacting with a photo-sensitive wall. In this way, an ephemeral, evanescent work is created, destined to disappear a few moments after its creation.
The fourth environment in the show, Io sono, tu sei, egli è (I am, you are, he is, 1973) is profoundly conceptual: it subdivides the space into a sort of triptych in which the artist’s reflections on his identity and nature as a physical being possessing senses are expressed. The he is constitutes painting, the you are is the happening, and the I am represents the tautology.

The exhibition is accompanied by a catalogue constructed around a text in which curator Alberto Salvadori develops and reconnects the themes developed during a detailed discussion with the artist. The volume comprises archive materials on the works exhibited, a carefully-researched biography of Biasi, and a bibliography. The images are provided by installation views of the exhibition itself. 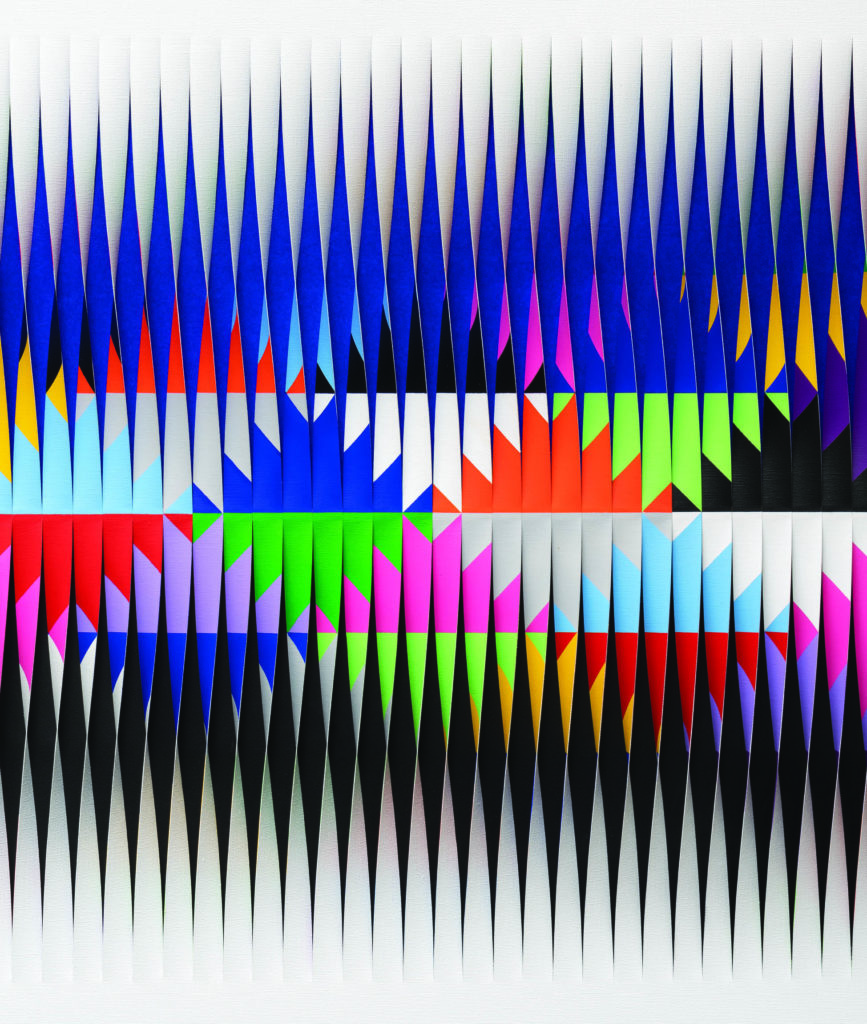