Organized and promoted by M77 in collaboration with the Municipality of Milan’s Culture Sector, the exhibition consists of two complementary elements: the gallery spaces will host a site-specific installation and a selection of recent works, some of which created for the event, while the Colonnade of the Rotonda di Via Besana will provide the stage for a major installation, also site specific.

A leading artist on the international scene, Kaarina Kaikkonen (Iisalmi, Finland, 1952) has exhibited in some of the most prestigious museums in the world. In Italy, she has held shows in key museums, such as MAXXI (2012) and the Centro per l’Arte Contemporanea Luigi Pecci (2014), as well as having been a guest at the Collezione Maramotti with the large-scale installation Are We Still Going On? (2012).

The artist is known for her environmental projects and impressive installations made of clothing elements, which represent a set of voices in dialogue with social spaces. As the title of the exhibition—Tied Together—suggests, her installations reflect a precise vision of the world: that of a common human journey, in which the closeness of the other is an indispensable factor.

Into her clothes works, neatly laid out and floating, Kaikkonen weaves poetics capable of questioning and dialoguing with the surroundings, giving a new lease of life to garments that, in the eyes of the public, thus become new and original, familiar and unknown, reassuring and disturbing all at the same time. Their presence irrevocably evokes an absence, in the antithetical coexistence of concepts such as covering and unveiling, expression and disguise, transformation and staging.

As Francesca Alfano Miglietti, curator of the exhibition, writes: “What is the link between clothing, body, and memory? Kaarina Kaikkonen’s works are poetic reflections on humanity in this era, and indeed in every imaginative and creative act, we find the same relationship that exists between the shadow and the body that casts it. Kaarina Kaikkonen knows that recreating experiences is remembering, thereby showing the other side of a presence: the clothes contain the presence of the wearer, and her work confronts the viewer with something new yet unfamiliar, but at the same time extremely familiar and intimate.”

At M77, Kaarina Kaikkonen presents works composed of various pieces of clothing, fragments of stories: a kind of evocation of individual and collective experiences. The use of old men’s jackets and shirts has a particular biographical significance for Kaikkonen: “My father died when I was a child, and after his death I started wearing his clothes so as to feel his arms around me; he and my mother thus come back to life along with all the people who make up the united humanity of my installations.” In these works, the physical presence of the bodies has vanished and the memory of them remains, which does not become so much a shadow but flight, lightness, and transformation. A whole that creates the magical setting of curiosity and fascination, typical of her work, which aims both to stimulate and “include” the viewer.

In the arcade of the Rotonda di Via Besana, with the support of MUBA – Museo dei Bambini Milano, the artist will install a large-sized work titled Kaarina Kaikkonen. Tied Together: more than a thousand shirts that seem to come alive, moving and fluttering. The monumental aspect of the installation also reflects the dialogue the artist interweaves with the architectural elements of the Besana Colonnade, in which the shirts—tied together between the columns—will invite us to look up: one of the key elements of her way of thinking about art.

The shirts will be collected thanks to the special support of the international organization for humanitarian cooperation Humana People to People Italia, which will provide the approximately hundreds of garments needed for the event, and through the involvement of all those who would like to donate or lend shirts from September 5 to 23, 2022 through three collection centers across the Lombard capital: at the University of Milan-Bicocca, by contacting Emanuela Mancino, professor of Philosophy of Education and the Pedagogy of Communication (emanuela.mancino@unimib.it); at MUBA, the Children’s Museum, located inside the Rotonda di Via Besana, by contacting Barbara Merati (b.merati@muba.it), and at the M77 Gallery itself (info@m77gallery.com).

On the occasion of the exhibition, a catalogue will be issued featuring a text by the curator as well as a conversation with the artist and images of all the works on display. 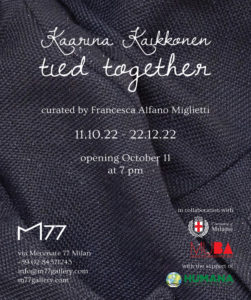