M77 Gallery presents an exhibition focusing on the experimental work conducted from the 1950s to the 1970s by Nino Migliori (born in Bologna, 1926), one of the great masters of 20th-century European photography.

“Time, light and motifs” covers thirty years of Migliori’s work, highlighting the developments and many innovations that, from the start of his career, have accompanied a photographic technique based on an impassioned narrative of human sensitivity. The exhibition takes the form of a sort of circular voyage through three “series” of works by the photographer: his earliest avant-garde experiments of the 1950s, his advanced work of the 1970s, and the depiction of 1950s Italy, when the country was in the throes of the post-war renaissance, in Emilia Romagna (portrayed by the series “people of Emilia”) and in the smallest villages of the remotest southern regions (“People of the South”).

The series dedicated to pure experimentation conducted in the 1950s is hallmarked by techniques in which the camera is not used as an intermediary. In these works, Migliori wanted to move away from a “documentary” depiction, and concentrate on the materials of photography, reflecting on gesture, speed and space, frozen into a single image: something unique. From the 1950s to the ’70s, Nino Migliori dedicated a lot of effort to what is now one of his most famous and best-loved projects: the documentation of walls in Italian cities. Motifs left on an anonymous wall are capable of defining an awareness, or are just a declaration of existence. The exhibition is completed by the series of realistic images made during the 1950s, when Nino Migliori’s sensitive, telling photographs depict the pain of Italy, a country that had lost everything during the war, but had retained hope and dignity. The absolute icon of that unforgettable period is The Diver, now a legendary photograph, taken in 1951, a figure immortalized by Migliori on Rimini’s jetty, a unique image.

The show will be accompanied by a publication with a text by Michele Bonuomo, and it will be open to the public from Tuesday 17 October 2017 until Saturday 27 January 2018. 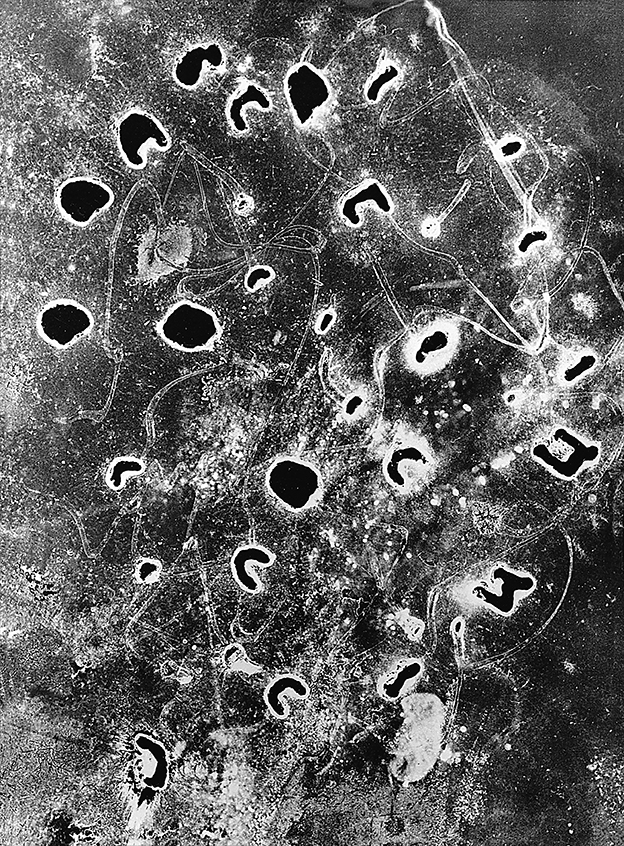