M77 Gallery is glad to present Veduta, a new solo exhibition by the Italian artist Velasco Vitali (Bellano, 1960), which will open to the public on Monday 4th March at 7 pm.

The exhibition curated by Danilo Eccher, is conceived as a single large-scale exhibition project and is a tribute to the city of Milan and to the history which unites places which are dear to the artist.

On the ground floor, the area is entirely occupied by a large picture depicting an alpine landscape, the Lombardy Prealps, with the Grigna and the Resegone peaks in the centre. The work is inspired by the famous drawing by Leonardo da Vinci from the Milan Duomo. This panorama did not only interest him so much as to lead him to study it at length, it was also very familiar. Vitali continued the study of the great Renaissance artist, enlarging and adding colour to this mountain range. The Bellano-born painter considers these peaks to be a special place, a landscape which has been familiar to him since his childhood.

It is the intimate bond with water that leads the large painting to be reflected, doubled as though in a vision, in an artificial lake which has been created especially for the event within the gallery; a metaphor for the change in perspective, the lake represents the place where the reflections of the artist are reflected and deepened.

On the upper floor, the artist places the Milan Duomo at the centre of his work, depicting it in four different moments of the day: dawn, midday, afternoon and night, each presented in three different paintings. This section of works is inspired by another important figure from the history of art, Claude Monet (1840-1926), who decided to carry out his own research into lighting on a national monument, Rouen Cathedral. In his series of thirty works, the French artist demonstrated one of the fundamental points of the impressionist movement, or rather how the perception that we have of reality is very different from its objective aspect. Our perception of the world is influenced by light, movement and weather conditions, in such a way that every instant appears different from that which follows.

The exhibition will be open to the public from 5 March to 25 May 2019 and will be accompanied by a catalogue in which the curator Danilo Eccher converses with the artist. 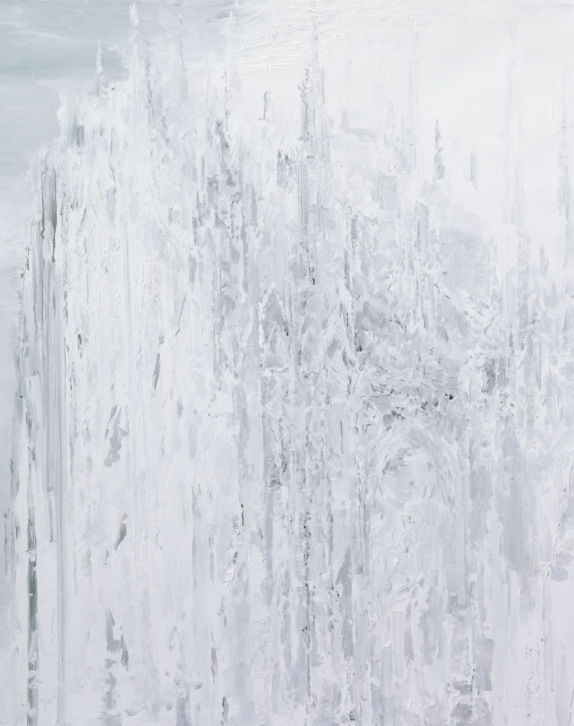