Agostino Iacurci (1986) is an Italian artist based in Berlin.

His practice embraces a wide range of techniques and materials, including painting, mural, sculpture, drawing and engraving. The works of Agostino Iacurci are characterised by synthetic shapes and bright colours, as the artist uses a simple language to guide different layers of interpretation. 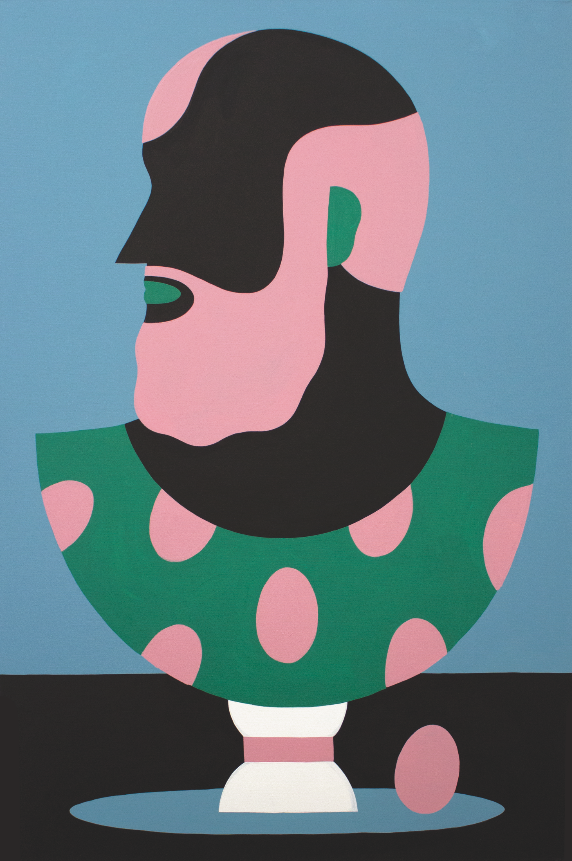 A painter, illustrator, engraver, muralist and set designer, Agostino Iacurci has created a site-specific exhibition project for the spaces at the M77 Gallery. This exhibition is presented as the arrival point of almost two years of research, which has been based around the theme of colour as it was conceived and used in the practice of ancient statuary.

The starting point for Iacurci’s research is Greco-Roman sculpture, as seen in the practice that originally merged the specific materials of sculpture – marble, bronze, wood or terracotta – with colour, thus creating a single form. Over time, artificial antique taste has in some ways altered this, if not actually erased it, therefore giving rise to an idea of ​​classicism made of aseptic white marble or monochromatic patinas. Iacurci is fascinated by the reconstructions of the original Greek and Roman works, with their vivid colours and violent, almost psychedelic patterns. With Gypsoteca, the artist wanted to create a contemporary personal catalogue of the old. The series of works on show captures the echo of remote yet universal artistic languages. Colour stands out as an archaic symbol and, at the same time, signifies a contemporary reality populated by virtual phantoms to coexist with.

The exhibition will remain open to the public from Tuesday 22nd May until Saturday 8th September 2018 and will be accompanied by a volume with a text by Michele Bonuomo.