Since 1948 Nino Migliori’s photography has been one of the most elaborated and interesting paths in European image culture. The beginnings appear divided between neo-realistic photography with a peculiar idea of sequential narrative, and experimentation on materials. On the one hand, almost immedinately a corpus emerged from the dominant style of the time, Neorealism: a vision of reality founded on the primacy of the “popular”, with its subordinates regionalism and humanitarianism. On the other Migliori produces off-camera photographs, works that have no comparison in the global photography scene, only understandable if read in the context of the most advanced side of European informalism whose outcomes often-anticipated some of the best-known among pictorial episodes. Research will continue over the years, involving other materials and techniques such as polaroid and bleaching.

Since the end of the 1960s his work has taken a clear conceptual turn, a direction that will start to prevail in the following years . Experienced, sensitive explorer and alternative reader, his visual productions have always been characterized by a great visionary ability that is infused in an original and unedited body of work. New scenarios and seductions where the project becomes composition, exploration of new territory, and a standpoint of critical reflection. Reflection on the use of photography, on its testimony through the discovery of renewed gestures and contaminations.
He is the author who best represents the extraordinary adventure of photography that, as a documentary tool, takes on values and content related to art, experimentation and amusement. Today Migliori is considered a true architect of vision. Every work is the result of a precise project on the power of the image, a theme that has characterized his whole production. 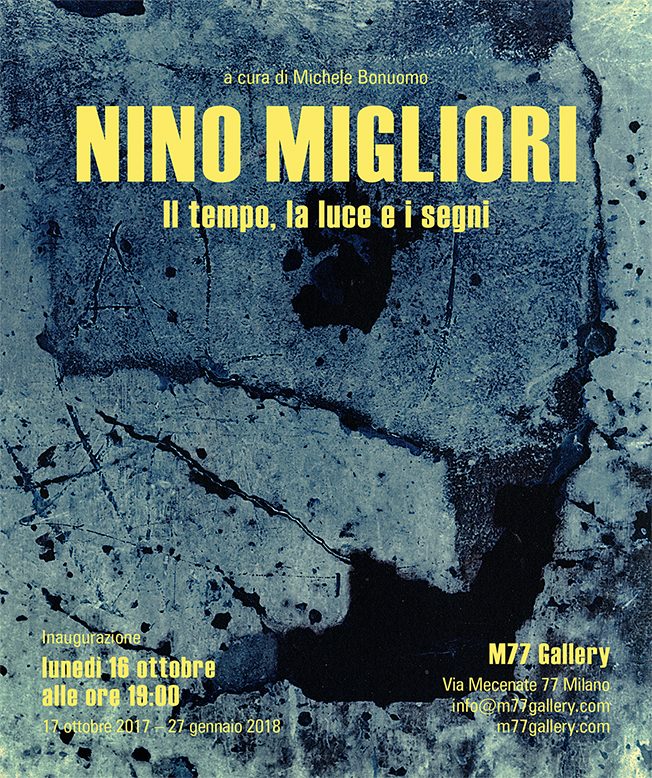 M77 Gallery presents an exhibition focusing on the experimental work conducted from the 1950s to the 1970s by Nino Migliori (born in Bologna, 1926), one of the great masters of 20th-century European photography.

“Time, light and motifs” covers thirty years of Migliori’s work, highlighting the developments and many innovations that, from the start of his career, have accompanied a photographic technique based on an impassioned narrative of human sensitivity.

The exhibition takes the form of a sort of circular voyage through three “series” of works by the photographer: his earliest avant-garde experiments of the 1950s, his advanced work of the 1970s, and the depiction of 1950s Italy, when the country was in the throes of the post-war renaissance, in Emilia Romagna (portrayed by the series “people of Emilia”) and in the smallest villages of the remotest southern regions (“People of the South”).

The show will be accompanied by a publication with a text by Michele Bonuomo, and it will be open to the public from Tuesday 17 October 2017 until Saturday 27 January 2018.